Abstract: In the thermoelectric industry, the structural differences of flow sensors often cause permanent pressure loss of different pipe networks, which in turn leads to higher energy consumption, which is not conducive to energy conservation and emission reduction. Based on computational fluid dynamics, this paper studies the measurement characteristics of flowmeters under different structures in steam pipe network by digital analysis technology and working condition calibration method. The results show that under the same working condition and the same equivalent diameter ratio β, the reasonable flow sensor opening method can reduce the permanent pressure loss of superheated steam in the metering process, saving power consumption for the enterprise, and the steam flow value is larger. The more obvious the energy saving effect, the more prominent the economic benefits.

The throttling differential pressure flowmeter has the longest history in the differential pressure flowmeter. Among them, the orifice flowmeter is currently the most widely used and the most standardized one in the world. The utility model has the advantages of simple structure, easy processing and durability, but also has the disadvantages of unstable outflow coefficient, low repeatability, low precision, poor linearity, and large permanent pressure loss. Therefore, according to the number of orifices and the distribution law of the throttle, the researchers invented a variety of new differential pressure flow measuring devices, compared with the traditional standard throttle device orifice plate, the throttle type differential pressure flowmeter The range ratio is large, the accuracy is high, the requirements of the straight pipe section are short, and the permanent pressure loss is small [1-4]. This type of flow meter is widely used in the thermoelectric industry. Driven by increasing demands for energy conservation and emission reduction, the thermoelectric industry also requires less permanent pressure loss during flow measurement. In this paper, two different opening methods are used, but the flowmeter with the same diameter and the same β value is used to measure the steam flow of the thermal power plant, and the digital analysis and working condition calibration are performed to compare the energy saving effects of the two flow meters. Refer to the selection of industrial field flowmeters.

The steam pipe is horizontally installed and has a size of Φ480×2. The medium in the pipeline is superheated steam with a density of 15.496 kg/m3 and a viscosity of 1.94×10-5 Pa•s. The working condition is selected at the normal flow rate of 200t/h, the maximum flow rate is 350t/h, the minimum flow rate is 50t/h, the operating pressure is 3.6MPa, and the temperature is 290°C. According to the basic parameters of the steam pipe network, three-dimensional models of the two flow meters can be designed as shown in Fig. 1, and named as No. 1 flow meter and No. 2 flow meter. According to the working condition data, the straight pipe section upstream and downstream of the steam pipe is long enough. According to the principle of full development of the flow field, and to improve the calculation efficiency as much as possible, 20D of the upstream and downstream straight pipe sections can be selected. Figure 2 shows a three-dimensional model of the installation of the sensor section of the No. 1 flow meter and the No. 2 flow meter in the pipeline. 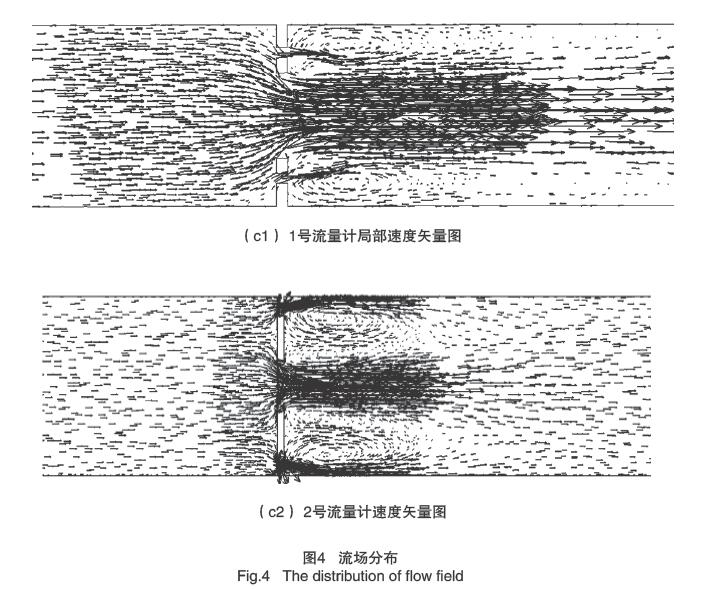 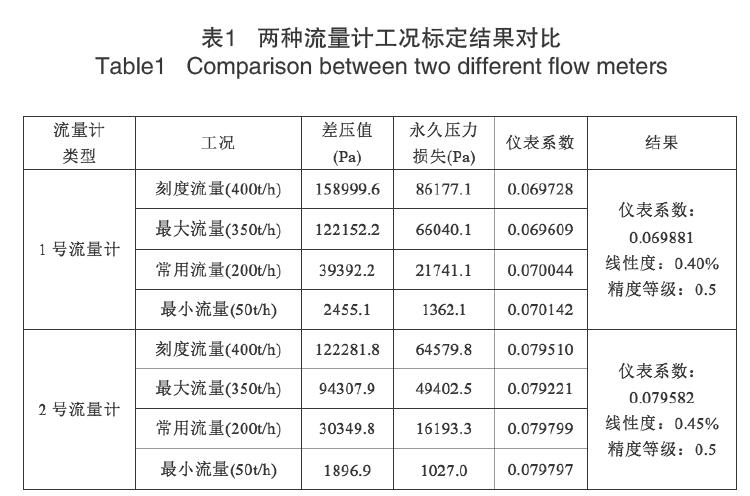 The reduction of permanent pressure loss can greatly reduce the energy consumed by steam during transportation. The running cost of transportation is a large expenditure (electric energy consumed) can not be ignored, although it is not reflected in an investment, but far from dynamic investment More than one investment in the meter. The calculation method of the power loss of the motor is shown in formula (1) [5]. 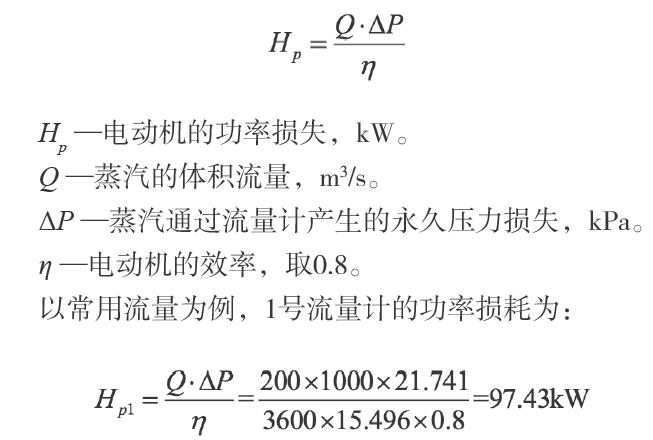 The annual electricity bill for the No. 2 flow meter is:

In summary, the parameters of the steam pipe network provided by the thermoelectric company on the site were designed and installed with No. 1 flow meter and No. 2 flow meter respectively. After the flow field analysis and working condition calibration of the two by digital technology, it can be concluded that:

2) Under the same range ratio conditions, the accuracy grades of both are 0.5, which meets the requirements of on-site steam metering.

3) A No. 2 flowmeter can save 110,000 yuan in flow rate under the normal flow rate for one year, and save 570,000 yuan in one year operation under the maximum flow rate, and the price difference between the two flow meters will not exceed Tens of thousands. Therefore, the operation of the No. 2 flow meter can not only recover the cost but also save money.